Another walk....another discovery! I have said that finding wildflowers and plants is like a treasure hunt, and identifying them is like a puzzle, but books and the Internet are helpful. Nature can blend and camouflage, as well as surprise! Today, I had a taste of both. I found a vine growing at the labyrinth that had muted purple-brown flowers. I have identified it as Carolina Milkvine (Matelea carolinensis) I plan to build a trellis and help secure it.

My second discovery was by accident. While walking near the Gathering Room, I bent down to pick up what I thought was a deflated balloon, but it's texture and smell soon let me know that it was some type of growing thing! It was somewhat grotesque looking. Bright orange, tubular, and VERY stinky. Mother Nature having a little fun! There were no leaves, so I was not sure if it were a flower or fungus. Quite a surprise. After searching my wildflower books, I concluded that it must be in the mushroom/fungus family. I found a site from UGA on Georgia mushrooms, and found it to be one of the most informative sites I've seen. I have put the link with the information and picture the Dog Stinkhorn (Mutinus caninus) . I have also posted my pictures of both of the discoveries today. Two new finds for The Cabin Path.
Posted by The Cabin Path at 9:19 PM No comments: 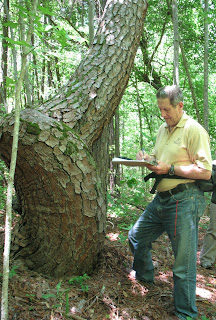 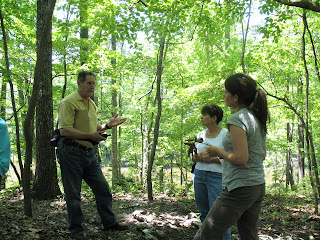 Wednesday, The Cabin Path was visited by Don Wells and his wife, Diane. Don is a member of the Mountain Stewards, a group that is collecting data on signal/trail trees and Native America history. Using a GPS , Google maps, and mapping software, they are tracing the trails and and settlements around the SE United States. "MY" tree was blown down by Hurricane Opal, but it was a favorite place to sit, read, and dream as a child. I remember taking my horse, Penney, down the trails and jumping off of her and onto this giant, bent tree. It was a like woodland lounge chair with a gentle curved backrest. Thirty years later, I would tell my children about this magical tree, and they, too, played on it. When our oldest was a senior in high school, she took many pictures of this tree. It helped her to be awarded a photography scholarship to college, and it left me with my favorite photograph of this tree. A few years ago, I learned about signal/ trail trees. They were used by Native Americans as a road sign of sorts to mark important places. We believe that this one marked the rock circle on the hill that overlooks our lake.
The tree seen in the pictures is believed to be a Prayer Tree, and it is also located on the property. It will take a core sample to date it, but it has all of the characteristics of a tree that was used in prayer ceremonies. Pines were used by the Utes and Plains tribes. Evergreens would carry their prayers to the skies year round, and this group is finding that pines were also used in the Southern states. The Cabin Path seems to have an important Native American link to the past.
Posted by The Cabin Path at 8:44 PM No comments: 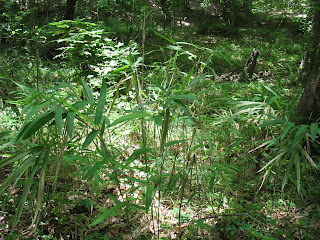 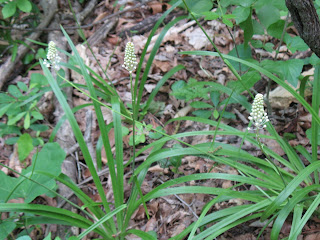 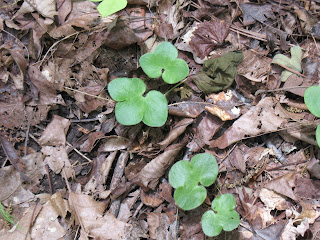 A walk around to see all the trees down from last weekend's storms led me to new discoveries. The upper part of the property had suffered the most damage. A swampy bog area filled with River Cane and Switch Cane is now the resting place for 3 huge giants. Two oaks and one maple are now uprooted. They took down the top of an old Dogwood as they fell. They led me to a new area that I don't visit often. A grassy leafy flower..looking alot like monkey grass..had a tall white plume. A tentative ID is Fly Poison... not rare, but interesting..and the little three lobed plants..no flowers, but I'll watch them carefully. I believe they are Hepatica, but will ask a few friends about them. I spent most of the afternoon with all of my wildflower books and downloaded pictures. Amazing that these treasures have gone unnoticed. It took downed trees after a storm for me to discover them. True...it sometimes takes a storm to notice what has been in front of you all of the time.
Posted by The Cabin Path at 8:46 PM No comments:

Labels: New Discoveries After the Storm 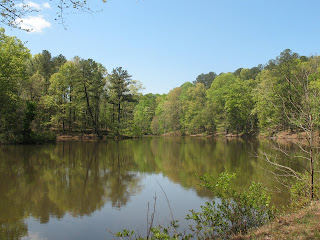 Each Camp Session is 1 Week Long
Register at
http://www.thecabinpath.com/reservations.html
Hours of 9:30 - 3:00 AGES 8-12
Bring a sack lunch, drink, and a healthy snack. Bottled water will be provided at no additional cost. Also apply sunscreen and bug spray or send it with your child. Please wear walking shoes!

Some of the activities include: 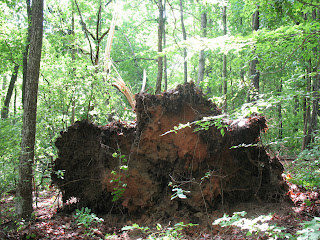 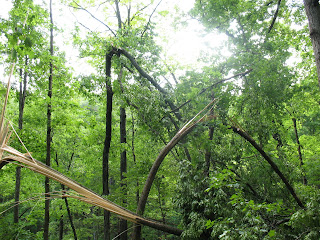 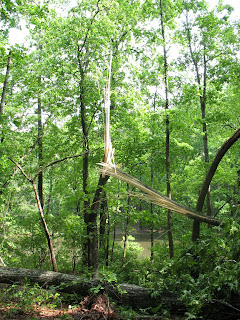 Mother's Day.. Mother Nature's Day! The alarms, accompanied by the flashes of lightning, woke me early. According to the warnings, we had about 20 minutes until they were overhead. The storms looked fierce on radar, and we were in her path. I quickly turned on the coffee pot...a cup of courage.. and hurried the cats and dogs into the basement. I filled my coffee cup and called the rest of the family to take cover. Reluctantly, they followed thinking it was another false alarm. We settled in just as the power went off. The crackling old radio named our road as ground zero, and we sat in the darkness while the rain pounded outside. It passed quickly, but it was still so dark. It seemed like hours until morning's light arrived. I started out for the barn and dodged debris all the way. The driveway was blocked by two uprooted trees, but I determined that there were no wires down. As I passed the Gathering Room, I saw chairs and tables scattered around the deck. As I approached the barn, Muffin welcomed me with a neigh. The cabin, barn, and hay barn were all standing. Large limbs blocked the roadway, but I soon saw that all of the horses were frightened, but okay. Callie, the cabin cat ran to meet me, and even the new baby geese seemed to be fine. After feeding all of them, I then began to walk the trails. Limbs, pine cones, and leaves littered the way, however, no large trees were down. The labyrinth cove appeared to be untouched until I walked the path by the lake. There was a row of huge oak and maple trees all bowed and broken, and one huge oak completely uprooted. They all lay like dominoes along the bank, but the large old beech tree was untouched. Across the trail, the path of the wind picked up again, and there were more old friends down.
Mid morning, the lights and power were restored. I then realized the extent of the damage in our area as the news showed picture after picture of destruction. Homes and property were changed forever, and life seemed a little more precious to everyone that was interviewed. I'll start tomorrow with the clean up feeling blessed that we were spared the worst of the weather. A powerful wake up call this morning! Yes, it was Mother's Day.. Mother Nature's Day.
Posted by The Cabin Path at 11:33 AM No comments: 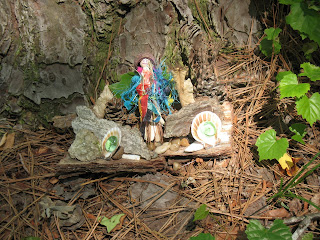 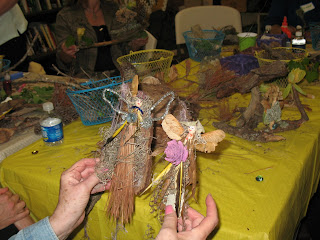 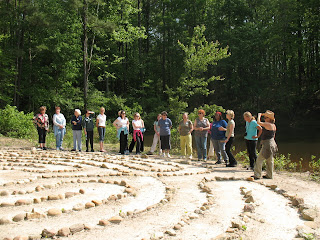 It was an amazing workshop! Fairies were the theme, but it was a time for yoga, fellowship, reflection, and laughter. Patrice Dickey, life coach, led us to find the magic in our lives. New friends and fairies were created, and we ended the day with a labyrinth walk. Thank you Patrice. We should meet often and keep the magic alive.
Posted by The Cabin Path at 9:32 PM No comments: 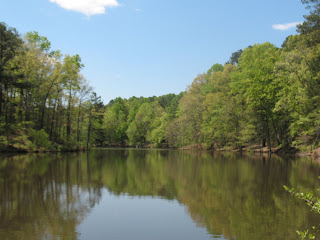 'The tree which moves some to tears of joy is in the eyes of others only a
green thing that stands in the way. Some see Nature all ridicule and
deformity, and some scarce see Nature at all. But to the eyes of the
man of imagination, Nature is Imagination itself.'
- William Blake, 1799, The Letters
Posted by The Cabin Path at 7:37 AM No comments: