Robert Bateman is regarded as one of the world's greatest wildlife artists.
http://www.gettoknow.ca/us/index.php This site has some very interesting information about children and nature. Take a few minutes to explore it. It also features a contest open for youth ages 18 and under. The theme: "Forests"

Look at this link for information!

Posted by The Cabin Path at 2:36 PM No comments:

While watching the rain today...a surprise!

Labels: A Shark in the Trees
Fall at The Cabin Path....

Labels: Fall at The Cabin Path

For the past 2 weeks, the Home School Thursday Workshops have been learning about insects. Since insects make up 95% of all critters, we learned how and why they are so important! We learned about some invasive Fire Ants, and we even found an underground Yellow Jacket's nest..luckily before they found us! We finished our workshops with Build a BUG.

Posted by The Cabin Path at 8:25 PM No comments: 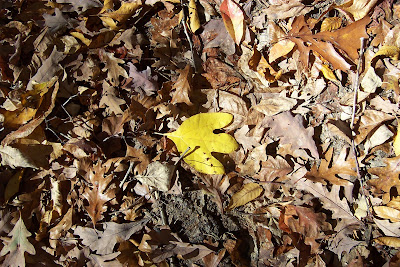 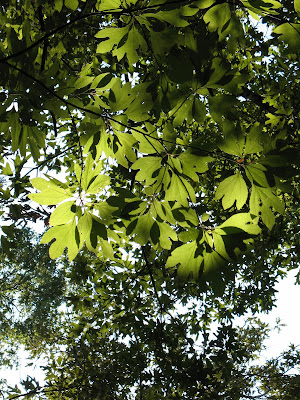 Every week as I walk the trails, I watch for plants that catch my attention. Usually it's a bloom, or the fact that it seems to be a food supply for one of the critters, but this week, the Sassafras Tree spoke the loudest! I discovered new Sassafras Trees in several new places. Today as I sat at in the rock circle on the hill, I gazed up at a passing Pileated Woodpecker. The wind made the leaves of the Sassafras look like hundreds of waving hands. I knew then, it would be my plant of the week!

Sassafras belongs to the Laurel Family. Its leaves resemble a hand with three extended fingers. All parts of the Sassafras were important to Native Americans and pioneers. Infusions were made from the bark of the roots and were taken internally to treat fevers, as well as a remedy to treat diarrhea, rheumatism, measles, and scarlet fever. An infusion of the roots was used as a blood purifier, and it was even used as a dietary aid for those overweight! Infusions of the plant were used as a cough medicine, mouthwash, pain killer, and gargle for colds. Root infusions were used as a wash for eye problems. Decoctions made from roots were used to treat heart troubles. An infusion of the plant was mixed with whiskey and used for rheumatism, tapeworms, and as a blood remedy to purify the blood. The leaves were made into a poultice that would be rubbed onto bee stings, wounds, cuts, and on sprained ankles.

In addition to this variety of medicinal uses, Sassafras was used for food, construction, and other purposes. The leaves were used fresh as a spice, much like bay leaves, for flavoring in meat soups. Leaves were dried and pounded and used as a thickening agent and to added for flavor to foods and soups. “Filé”, made from the ground roots or leaves, is an important spice still used today in Cajun foods, such as gumbo. The white or red roots, made a pleasant-tasting tea, although the red roots were preferred, young leaves were also used. The wood from the Sassafras tree was used to make furniture and boats. The flowers were used as a fertilizer when planting beans. The plant was used as a fragrance to scent soap. The bark contains oil of Sassafras, an important flavoring. The bark was used as an emetic purification after funeral ceremonies. The roots were often used as a brown dye. A Sassafras in your yard also helps to keep mosquitoes and flies away! It was also used to make root beer, but because it has been linked to cancer, it is no longer used for it.

Wildlife is attracted to the Sassafras, and I have noticed that it is a favorite of the beaver. The fruit of the Sassafras is quickly eaten by birds, squirrels, and deer. Early settlers thought that the tree's wood had magical qualities to ward off bad spirits. Beds were often constructed from the wood of the Sassafras to protect them as they slept. Author Albert Constantine Jr., in the book Know Your Woods, wrote that Sassafras has had a peculiar history. "It was once supposed to possess miraculous healing powers, and people believed that it would renew the youth of the human race. The production of sassafras oil is perhaps the largest industry dependent upon this tree." A Fountain of Youth???

Sassafras Trees grow on the rock circle hill at The Cabin Path. I wonder if they sprouted from the roots of those used by the Native Americans in their ceremonies long ago. Their leaves will soon turn a beautiful orange and gold...and then fall and cover the ground with a carpet of little "hands". They are a favorite of the Tree Workshop groups because they are so easily identified, but they are a favorite of mine for all of their mystical history and beauty.
Posted by The Cabin Path at 7:46 PM 1 comment: