Another Archaeological DIG at The Cabin Path!

The Archaeological DIG a couple of weeks ago generated much interest around The Cabin Path's Groups (Yahoo Home School, Facebook, and Website) By request, the Summer Workshop kids wanted to have DIG of their own! Since the majority of this group were 4- 6 year olds, I needed to think of more activities! I knew that the actual "Dig" involved hard work...and this younger group's attention spans might not last. (and it was really hot!)
We began our workshop with a box of dog treats, a dog leash, and a dog collar. I asked them to pretend that they were detectives, and that these 3 things were clues. Of course they guessed that I had a dog..or that a dog might be nearby. I told them that archaeologists used the clues that they uncover to know what might have lived in the area of their dig! We then looked at the box of artifacts that have been found here over the years at The Cabin Path. The arrowhead points and the Mississippian pottery pieces are always fun to see and hold, and I had a fossil of a fish that I have had for years. (a gift..not from The Cabin Path!) We talked about how fish, animals, insects, and even bones get trapped between layers of rock..and how fossils are formed. 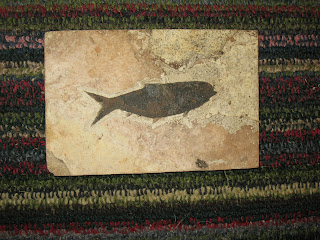 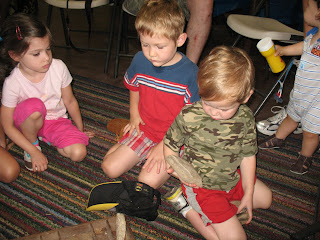 Next was our art activity....the old Plaster of Paris fossil making!! Over the years, I have learned a few tricks to making fossils. We started with a paper bowl. Names were written on the bottom and then filled with about 1-2 inches of sand. We then picked our fossils! Nature found objects (leaves, thin bark, feathers, etc) are beautifully preserved, but most of this group elected to find "bugs" from the boxes of plastic animals and insects that we use in sand play. I had pre-measured the Plaster of Paris in cups, and when the fossils were arranged in the bowls and sand, I added water and a little brown paint..and they stirred to make a thick milkshake consistency. We then poured the plaster over the fossil...but NOT moving the bowl! A little "tap" on the sides to remove air bubbles, and we then left them to cure. I have to admit, they turned out great! The sand and paint gives them a more realistic look. 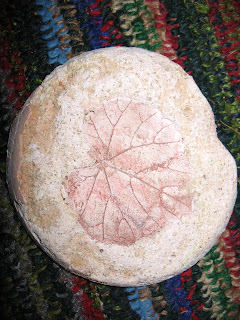 We walked over for the DIG while the fossils hardened. 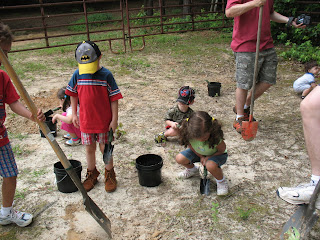 Using the area from the previous dig, we filled buckets.... 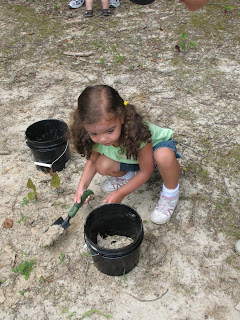 and then took the buckets to our sifting station. 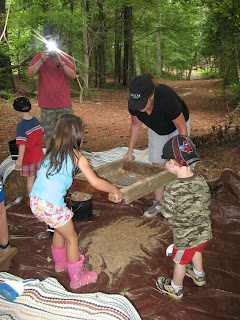 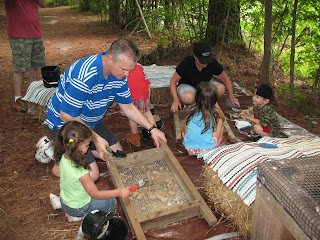 After digging and sifting, we then visited the Native American hill that has a rock formation that was used for ceremonies. The large rocks are arranged within double rock circles. They mark the directions North, South, East, and West...to suggest that they were used as a calendar using the sun and the moon. 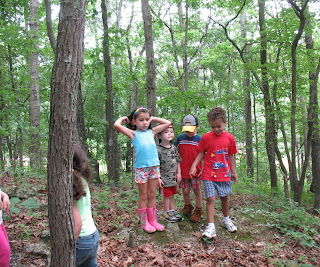 We want to conduct a DIG on this hill next fall. 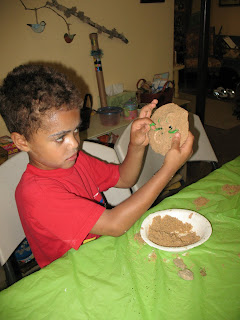 We then returned to the Gathering Room for our picnic...and the fossil reveal!!
Pull the "fossil" out gently.... 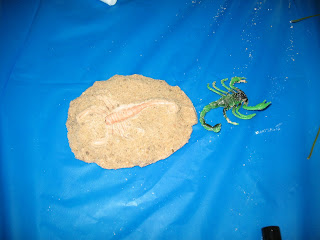 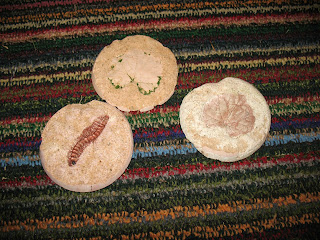 A fun day...learning about the past and how archaeologist uncover clues and learn from the past. We even talked about some of the things that archaeologist would discover about us! It even led to a discussion about conserving and our environment today.
Posted by The Cabin Path at 3:05 PM No comments: 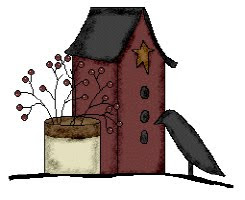 I have always loved the crows around The Cabin Path. They are the "watch dogs" in the woods. I learned many years ago to listen to their warnings, and other animals also respect their caws. They sound the alert for coyotes, fox, cats, dogs, hawks and even people in the woods!
Cornell has a wonderful site to learn more about crows.

Last year, I heard an unusual sound from the woods.  It reminded me of the "beep, beep" of a truck backing up. After several days of waiting and watching, I discovered that the sound was coming from a crow! My research of crows lead me to the fact that will often mimic sounds of other birds and sounds.  I strongly suspect that this poor creature sat and watched as construction bulldozers and trucks took apart its habitat back in the building boom days!

I have also studied about "animal messengers and animal totems" throughout history, and especially important to American Indians. Many legends and stories have been passed down about animals, and the crow is often the trickster, but it also serves as a spirit protector and guide. I have learned to pay attention to my surroundings when I hear the crows.  Ted Andrews wrote many books about animal spirit guides, and there are many sites online that discuss animal totems. One site wrote:
"Crow teaches us to know ourselves beyond the limitations of one-dimensional thinking and laws. It is about bringing magic into our lives. This animal teaches to appreciate the many dimensions both of reality and ourselves, and to learn to trust our intuition and personal integrity. There is magic wherever crows are. They give us the message that there is magic alive in our world and this magic is ours to use and create a new world for ourselves ." 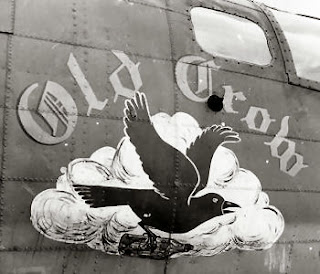 Yesterday was Memorial Day.  I wrote about my Dad, a WWII veteran and POW.  I returned to the website of the 303rd Bomb Group, and I was reminded that the nose art on my Dad's plane was "Old Crow".....another link to this messenger in the woods, and another reason to love this creature.
Posted by The Cabin Path at 7:38 AM 2 comments: