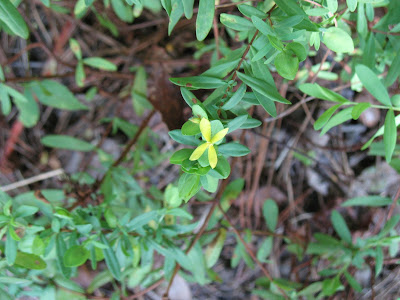 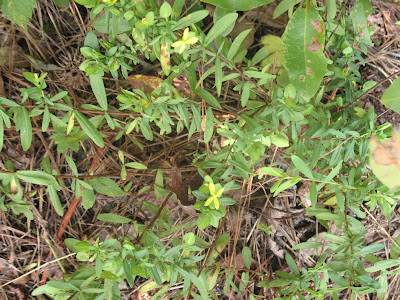 Plant of the Week:

There is a little bushy plant that grows at The Cabin Path. Its leaves are soft to the touch, and most of the year, it goes unnoticed. In the fall, there are little yellow "X's" that sprout and bloom. Hence, the name, St. Andrew's Cross. I find that it is a close relative to St. John's Wort. Many of the early herbalists used St. Andrew's Cross for many of the cures of its cousin. One of the earliest cures was for snake bites! It was often boiled in milk, poured on the bite, and the rest was consumed. Other uses include crushed leaves to treat nosebleeds, roots and leaves boiled to treat fevers, colic, sores, and as an eyewash. The bark of the plants was often chewed and packed around an aching tooth. The most interesting remedy using St. Andrew's Cross was used by the Native Americans. The roots were boiled and cooled, and then it was used to bathe the legs of babies that were slow to walk. It was believed to strengthen the legs and make them stronger. Older NA also used it as a treatment for rheumatism. (I may look into this one a little more!)

In researching and learning about wildflowers, I am fascinated by the old remedies. A Cherokee friend once told me that, "the remedies you need will grow in your backyard." I know that the forest was the early pharmacy, and I remember my Grandmother using plants for coughs and colds and everyday scratches. I wish I had paid more attention! I am taking it a plant at a time, and learning a new plant each week that catches my attention... a weekly blog makes me stick to it! I'm blessed to have a big backyard, so it should be a pretty good learning experience! 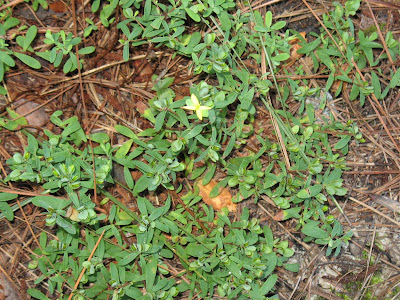 Posted by The Cabin Path at 9:38 AM No comments:

Senses in Nature Part 2 Workshop for the Home Schoolers! We had a great group, and the rain held off for our trail walk! After looking for ways that animals use their senses in nature, we headed back to the Gathering Room for our Senses Masks! Too wet to use many of our trail finds, so we used materials found the the art boxes. Creative minds and a little glue, scissors, and yarn helped us to construct masks (with a secret compartment on the back!) It will be a place to keep favorite finds from The Cabin Path.

Posted by The Cabin Path at 5:04 PM No comments: 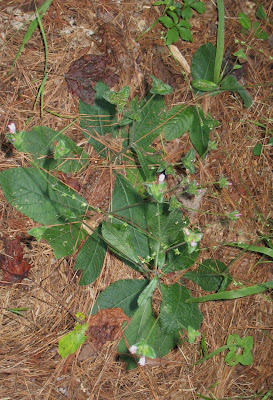 Elephant's Foot! A strange, but very descriptive name for this wildflower. It is identifiable in all seasons because of its big, flat and fuzzy leaves that hug the ground, but in the fall, it shoots up stalks of purple flowers. They are not rare, but very fun and easy for children to identify. There are other names, Devil's Grandmother (I never found out why!) and Wild Tobacco Plant. I thought perhaps with that last name, it was used for smoking, but the large leaves and the fact that it commonly grew next to large tobacco fields was the answer I found for that one. The Lumbee Indians call it Wood’s Mullein and describe a poultice of it held on the chest to treat pneumonia. For centuries, Mullein has been hailed for many healing abilities. Research indicates some of Mullein's uses are "analgesic, antihistamine, anti-inflammatory, anticancer, antioxidant, antiviral, bactericide, cardio-depressant, fungicide, hypnotic, sedative and pesticide"!! A "heal all" remedy! Elephant's Foot caught the attention of drug manufacturer Parke-Davis in the late 1890's when they marketed a liquid extract of the herb as an expectorant. The interest in the herb did not last, but many Native Americans and old timers still use the large leaves and roots for treatment of sores and even staph infections..as well as for respiratory problems.

Elephant's Foot is a perennial, and it commonly grows in the southeastern United States. It is found in dry, open woodlands. There are similar species that have smaller leaves and clusters of flowers. 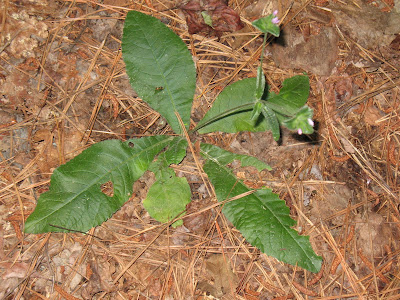 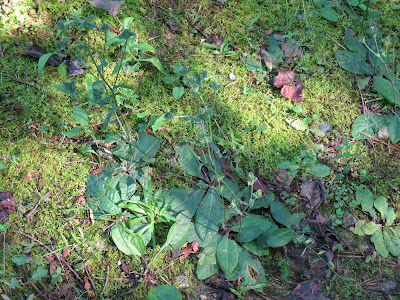 Posted by The Cabin Path at 6:28 PM No comments: 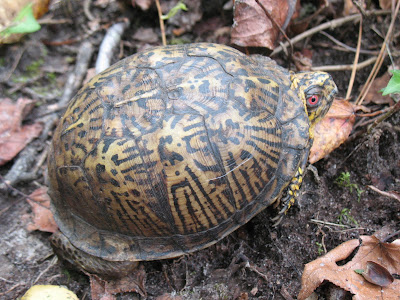 The Eastern Box Turtle (Terrapene carolina) is a terrestrial turtle found throughout the eastern United States, and is one of the longest lived animals in the world. Box turtles have a high domed carapace (top shell) and hinged plastron (bottom shell), which allows these animals to completely close up their shell to protect themselves from their enemies. The decorative shell patterns of box turtles are extremely interesting, and each box turtle is unique. The eyes of the male are usually red, and the female's eyes are a yellow brown. The male can also be identified by having a concave shape on the under side shell (see pic). Box turtles are omnivores with diets consisting of anything from slugs and snails to mushrooms and berries. 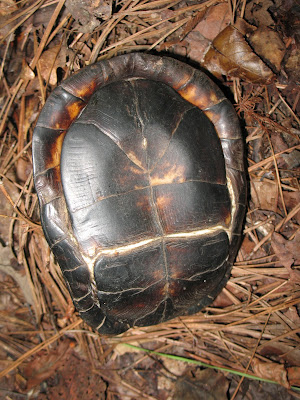 The turtle is very sacred to many Native Americans. In fact, many tribes attribute the creation of the world to the turtle. One NA legend believes that a sky girl fell to our world, which at the time had nothing but water and water based animals. The animals took her to the wise turtle. The turtle told them to put sand grains from the bottom of the ocean on his shell. They did this and soon the land grew and grew until the sky girl could live on this land. Many NA tribes believe this new land is North America.

Many box turtles have been found at The Cabin Path, but I have noticed a decline in their numbers over the years. For the last three years, I have been photographing and keeping a journal of the box turtles. Early fall seems to be a very active time for them, and they can also be found after a rain. Fire ants will disturb the nests of box turtles and eat the eggs, and I suspect that they are the single most cause of their declining numbers at The Cabin Path. I use chemical insecticides for very few things here, but I do treat the fire ant nests.


The Cabin Path is a certified animal habitat, and every effort is being made to help our Box Turtles to thrive. 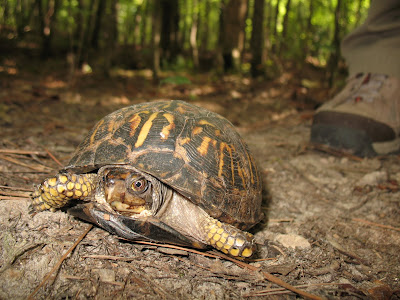 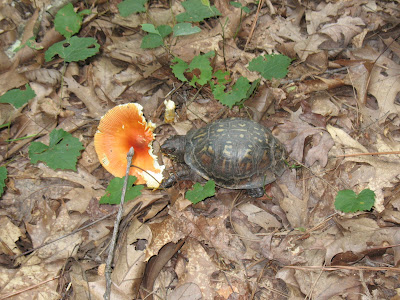 Posted by The Cabin Path at 7:49 PM No comments:

Fall 2009 will offer more workshops with Dr. Clifford Blizard and his wife, Valerie. I worked with Clifford and the Hill Country Montessori School last year. He is a walking encyclopedia with many degrees in geology and environmental science..and education. Valerie is a talented photographer, botanical artist, and student.
His BLOG is http://chattahoocheechorography.blogspot.com/ and you can read about some of the workshops that he is offering this fall...some of them at The Cabin Path.
Posted by The Cabin Path at 9:12 PM No comments:

Looking for a BIOLOGY project???
What about MYCOLOGY?

There are many wonderful field guides available at your book store or the public library! Bring your camera, nature journal, and field guide and explore the mysterious world of mushrooms!
Posted by The Cabin Path at 11:04 AM 1 comment: