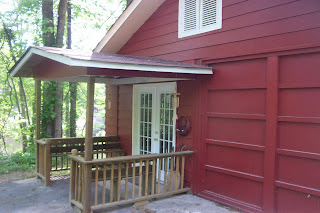 The Cabin Path is reserving THURSDAYS for Home School Groups this year. Information and posts for this group can be found :

If you are home schooling, or if you know of someone who is home schooling, please pass this information along. Watch for upcoming events and meetings. Book Clubs, Science Clubs, Writing Clubs, and Nature Clubs are just a few of the things we will schedule. There will be workshops for toddlers - high school. Our outdoor centers are expanding, and TCP will be an enrichment resource for your curriculum. Check our schedule, and we hope to see you soon!

http://groups.yahoo.com/group/thecabinpathhsg (copy and paste)
Posted by The Cabin Path at 8:00 AM No comments:

Labels: Home School Groups in Georgia at The Cabin Path 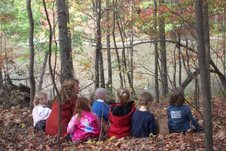 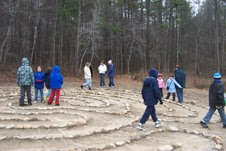 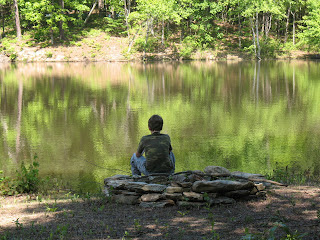 Although the temperatures here will be in the upper 90's today, fall is just around the corner. I have enjoyed the classes and workshops with the Hill Country Montessori. This year, The Cabin Path welcomes them as a weekly part of our schedule. Located a short distance away in the community of Serenbe, the HC Montessori School is composed of some of the most innovative, compassionate, and intellectual staff and teachers around. They are involved with many community projects, as well as offering a diverse curriculum. The Cabin Path is proud to share our nature habitat, trails, and outdoor centers with them. We are also looking forward to having their ideas and help with new projects, too. Fall will be an exciting time, and although Fridays will be reserved for the HCM, we still welcome individuals, groups, and families for workshops/walks any of the other days! Watch for all of the new projects and centers coming this fall!
Posted by The Cabin Path at 9:43 AM 1 comment:

A side note... In February 2008, my husband took a photography workshop. As a field trip, the class visited historic Oakland Cemetery in downtown Atlanta for a photo assignment. For those of you that are not familiar with it, Oakland is the resting place of many famous citizens, civil war soldiers, "Gone With the Wind" author, Margret Mitchell, and its paths are a reflective history of the city and her people. It was originally Atlanta Cemetery, but was renamed in the mid 1800's to Oakland because of the wonderful oak trees that dotted the 88 acre parcel. http://www.oaklandcemetery.com/ I carried my camera, and found myself wandering the paths, and I soon became completely mesmerized by the epitaphs and intricate carvings on the markers. I found it to be a peaceful Sunday outing, but little did I realize that I was documenting some of the last days of Oakland in its glory. One month later, March 2008, a tornado ripped through downtown Atlanta. Most of the news attention was on the damage to high rise buildings in the city, but in the days that followed, they begin to show the destruction at Oakland. "The trees!" I thought. As I watched the news stories and pictures, I re watched my photoshow of my visit. A local TV channel did a follow up program about the cemetery and its damage. This site also has a photo slide show of the damage. http://www.wsbtv.com/slideshow/news/15617259/detail.html How relieved I was that our trees and place were spared. There have been many storms and tornadoes this year. We have lost several trees. As I walk the trails around The Cabin Path, I wonder about the history of our place. We have the unmarked grave on the hill behind the cabin, and the rock piles and squared stones of the rock circle that are perhaps unmarked epitaphs to those that once walked over our place. I remember a verse from a Native American poem reads:
Do not stand at my grave and weep. I am not there, I do not sleep.
Do not stand at my grave and cry. I am not there, I did not die!
and I realize that we do live on though the lives of those who stop to remember. 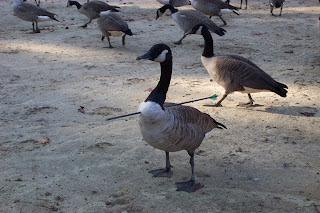 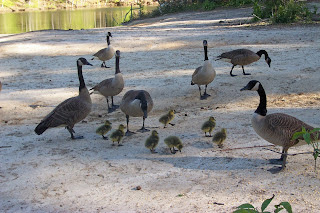 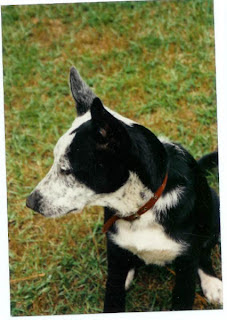 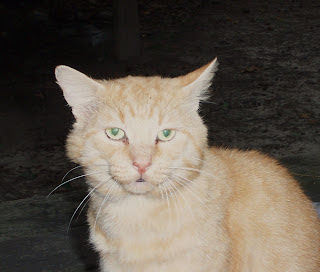 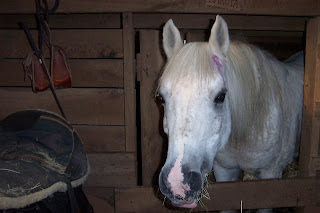 Speaking of animals.....
many have asked me the fate of some of the animals shown on my web site. The goose with the arrow gets the most concern because many of our visitors saw this pitiful creature. Great news..after many failed attempts to catch him/her, (you should see the PVC pipe/net my husband made..like a huge dipper) the goose actually loosened the arrow enough for it to be pulled out. I spoke to several vets that advised me to trim the arrow off and leave it. They all said that it evidently missed all vital organs. Well, Lance solved his own problem...he managed to work it back flush with his chest. There was a small dimple on his chest to identify him from the rest. He was able to fly, swim, and eat throughout the whole ordeal, and he/she raised a family that spring. I can no longer see the scar, but it still claims The Cabin Path as home.

Bingo, my beloved dog, died last fall. She was almost 18. She was the most gentle spirit, but she would have defended me to her death. She never chased any deer, cats, geese, but she was my shadow and friend. She loved to ride in the golf cart with me around the property, and she never left my side. I miss her terribly.

The baby deer is now grown. This season, there are 2 new spotties. The Moms wisely have them safely inside of our neighbor's fenced yard...the "nursery"...and they will be released when the Moms say it's time!

The cabin cats have all been spayed and neutered. Two have disappeared..I suspect coyotes. Callie and C.C. love the freedom, and they have the shelter of the cabin and the barn. I feel that it would destroy their spirit to confine them to a house, but I worry about them constantly. An old yellow "Grandpa" Tom has also taken up at the cabin, and he's next on the list to be neutered.

Maddie is a fairly new addition. She is an Australian Sheperd from a rescue. Badly abused when she was a puppy, she was returned to the shelter two times before my daughter saw her. She cowered down if she was approached, and she would be so frightened that she would wet on herself. Months of patience and lots of love have helped her, but she still frightens easily, and it has been challenging. She is so sweet...I cannot imagine anyone harming her, but she still bares the visible and invisible scars of abuse. She has a safe place now. Jesse was found at the barn when he was about 6 weeks old. A mystery still, but he and Maddie are best friends.

Stormy, the white horse, passed away a year ago last fall from Cushing's Disease. He was 22. The purple on his head in the picture was from a berry patch! He loved to scratch his head on the tree, and he often looked like an Indian war pony or a mystical unicorn! He greeted me every morning with the most wonderful neigh..even up to the day he died! Some mornings I forget he's gone, and I expect to hear him. He had the typical Arabian attitude, but he is missed. He was part of our family for 12 years. He's buried at the far end of the pasture, and it is now called "Stormy's Point"

Those are a few of the updates. Some sad, but all of the critters have love, care, and a safe place. They give so much and ask so little. The 2 new kittens have almost doubled their weight, and they are thriving. I'll be posting more updates, and I have been keeping a journal of their stories that may turn into a book! I'll let you know! See the Photo Show, "One Safe Place" on my web site. The web site is http://www.thecabinpath.com/ and click on the sign post "STABLE" The Photo Show is at the bottom.
Posted by The Cabin Path at 10:54 AM No comments: