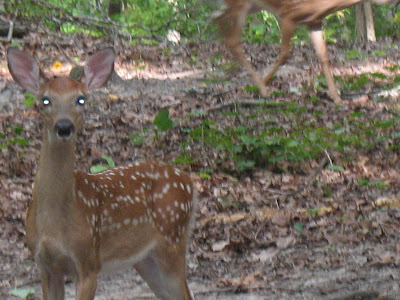 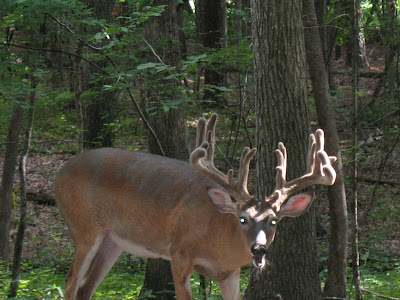 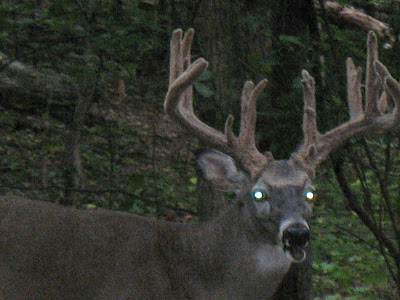 Comet was a fixture around The Cabin Path.... a well kept secret among friends. I first saw Comet one spring about 9 years ago. He was a tiny, frightened, spotted baby deer tangled in a patch of honeysuckle. I watched him from a distance thinking he was playing, but I soon realized that he was indeed hung. I walked slowly toward him (watching for Ma in case she was close by) and began talking to him. He protested for a moment, and then he seemed to sense that was not going to hurt him. I sat on the ground and hugged him in my lap as I unwrapped the vines from around his little stick like legs. It was evident that he had been trapped for some time, and he lay quietly, probably from exhaustion, but he seemed to instinctively know that I was there to help. After some effort, I freed his little legs and sat holding him and talking softly to him. He then stood up, wagged his tail, and trotted off. That was the first time I met Comet. I saw him many times that spring. His Mom would bring him into the pasture to eat the ducks' corn and lick on the horses' salt block. Most of the deer knew the sound of my golf cart, and I would often sing to them when I was working on the trails or walking. They would come when I called, "Here, Babes!" My hunting friends and family would roll their eyes and shake their heads, but they understood the special bond that we had. (The Cabin Path is posted and the hunting season for deer in our area is bow only.)
Two years ago, just after dark, I heard a shot and saw a light in our front woods. Without thinking, I ran out the door and started yelling. To my surprise, I caught up with them! It was a camo decked guy who mumbled that he lived right up the road, and he was tracking a deer he had shot. He was still carrying a gun, so I knew that he was not bow hunting, and he had a huge spot light..another "not suppose to do that" in the hunting world. I asked if he knew he was on private land, and asked how did he not see the posted signs that outlined the property. He spouted, "Oh, you're one of THOSE!" I replied by saying, "Yeah, if you mean someone that doesn't want someone shooting in their front yards! Yeah, I am!" He continued trying to tell me why people should hunt and how ignorant I was for thinking that way, and I sternly told him that people CAN hunt, but they need to obey the rules, and they certainly shouldn't trespass to do it! My husband arrived about that time..a relief to both of us, and he retreated. Several days later, the buzzards led me to the carcass of a little doe. (He bragged at the local store that he shot a trophy deer and some crazy woman stopped him from tracking it!)
Last October, I again heard shots and saw lights in the front woods. All were in bed except me, so I did not try to confront them. Tears filled my eyes, and I whispered, "Run, Comet!" The next morning, I left to feed horses early, and I called the deer. They all seemed upset and spooked..and no Comet. For the next two weeks, I walked and I called, but no Comet. "Some great hunter!" I thought, and it was creepy to think that he had probably been watching in the woods to learn his pattern. (and mine) Comet would eat at the barn and then sleep in front of our house, and then follow me to the barn in the mornings when I fed the horses. I realize he was a wild animal, but it was not his fault that most of his range had been bulldozed. He felt protected on our property. He was not fenced in, but I never knew him to wander very far...he was so predictable! I felt that I had betrayed his trust. He had been a gentle friend for many years. I watched him chase the ladies around the cabin, spar with the young bucks, and even gently nudge the new spotties every spring. He was never aggressive, but he was respected by the other bucks. Avid hunters agreed that he was special!

There is a new little spottie in the woods, and I hope that Comet is the Papa. I still watch the deer in awe, but I no longer encourage their trust. I know there are many responsible hunters in the world, but I know of at least one that is not. No one can convince me that Comet was not killed that night..by a gun.. and with a spot light, and on posted property. I'm sure Comet is on a wall somewhere, and he may have made it into a magazine or two. I'm sure the story is wonderfully exciting...the true sportsman with the trophy deer! I miss my friend, and I will never forget the almost 10 years he was a part of The Cabin Path.
Posted by The Cabin Path at 7:45 PM 1 comment:

Labels: Thoughts on Hunting and Comet 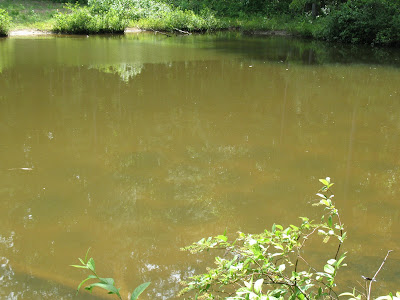 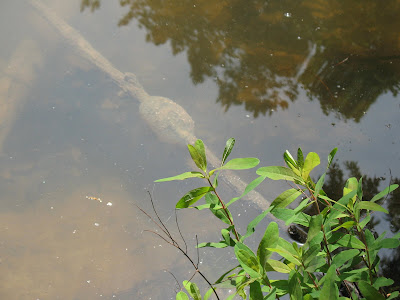 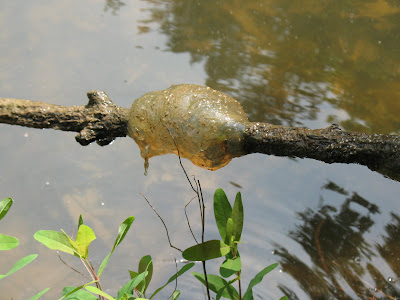 Nature Watch Workshop yesterday was a lesson about WETLANDS and the importance of protecting the plants and animals in these magical spots. We walked back down to the labyrinth cove to check on the tadpoles, and I noticed a strange alien like pod growing on a submerged stick. My first thought was an egg pod of some type...but the size of it was puzzling.

I notice several more dotted around in the water. Truthfully, it looked like something from an outer space movie..especially since there were the crater like bream beds just behind it. (top pic) Bream will fan out circles in the mud with their tails and lay their eggs in the carters... and then protect them from predators. We pulled the stick with the glob attached to examine it closer. It was a very alien like pod...slimy and solid, not mushy..too big to be frogs eggs.... or fish eggs...very unusual.

My Internet search (starting with "alien like egg pods in lake") led me to a trail of other sightings..no, not extraterrestrial in nature, but MOSS ANIMALS in nature! Pectinatella magnifica... Bryozoans, to be exact! No, they are not harmful, in fact, they live only in very clean, unpolluted waters!

One article, http://www.millermicro.com/bryozoa.html describes them. It was a fun discovery, especially since we were talking about WETLANDS! Another Cabin Path lesson learned!

Posted by The Cabin Path at 8:45 AM No comments: 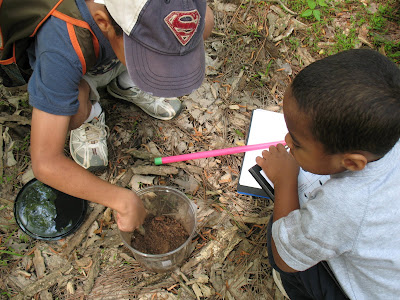 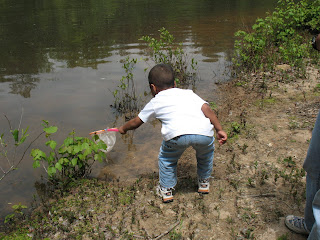 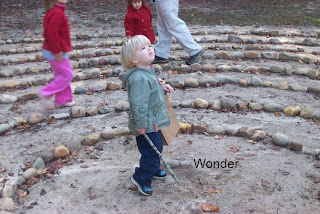 Life gets complicated. Everyday stress and worries often fill the days, and even the nights.
I had a workshop last fall on the 5 senses in nature. I asked a group of children to name their 5 senses. "Sight!" exclaimed one child..."Smell!" said another..."Taste!" then "Touch!" and finally, "Hearing!" About to continue the walk and lesson, I noticed a little boy with his hand up. "Miss Sarah!" he said. "I know another sense!" I paused and asked him to name it. His answer, "I have a sense of WONDER!"
Too often we forget our sense of wonder. We take for granted a smile, a flower, our families, our memories, and sunsets. Simple things that would be missed and often go unappreciated...and even important things that will be missed and often go unappreciated.
I no longer call my workshop The Five Senses in Nature, it's simply Senses in Nature. Whenever things get hectic and seem overwhelming, I pause and remember the lesson I learned from a little boy one day last fall on a walk in the woods at The Cabin Path.

The Kingfisher was teaching her babies to fly this morning! Every year, I watch and wait as she begins her ritual. They first start on the railing on the dock. She lines up the babies, and she fearlessly flies out over the lake, pausing only briefly before disappearing under the water in a crashing dive. She surfaces with her catch and flies to the fence post on the opposite side of the lake. The babies sit in awe. She then calls them with a clicking sound, and the babies fly over the water. They join her on the fence, and it is repeated over and over again. One by one, the babies try their first dives. Most of the time, their first attempts are just "fly bys"...they chicken out at the last moment, and Mom sits fussing. It is absolutely hypnotic to watch. The Mom calls, scolds, and seems to reward their courageous efforts. Patiently, she calls until every one of the babes learn to fly, dive, and hunt for their first little fish. They practice tirelessly, and then sit sunning and resting, and then continue their lessons. It's an important lesson to learn, and one that not only depends on survival, but trust...another one of those life lessons learned at The Cabin Path.
A wonderful link for birds is http://www.allaboutbirds.org/guide/Belted_Kingfisher/id
It gives ID and the calls of birds. Enjoy!
Posted by The Cabin Path at 3:39 PM No comments: